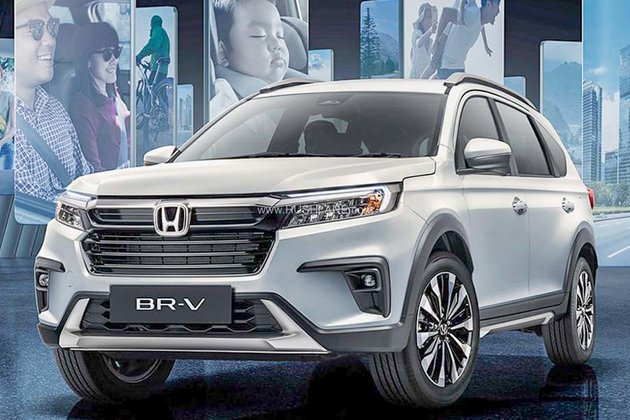 In Indonesia, BR-V is among the popular three row vehicles in the country. It is for this reason that Honda has made the global debut of this 7 seater in Indonesia. In international markets, the new gen BR-V will go up against the likes of Toyota Avanza, Daihatsu Xenia and upcoming Kia MPV. In the Indian market, Honda BR-V was discontinued last year due to low sale volumes.

Production-spec BR-V is largely the same as the concept variant showcased earlier this year. Conceptualized and created by Honda R&D Asia Pacific Co., Ltd., the 7 Seater MPV will utilize the familiar design aesthetics of other next-gen Honda cars such as Civic, HR-V and City.

Some of the key features include an upright nose, multi-slat chrome finished grille, wraparound LED headlamps, sporty LED DRLs, and LED positioning lights on fog lamp casings. New Honda BRV has a prominent front bumper and its dominating stance is further accentuated by its clamshell bonnet.

Talking about the side profile, one of the most noticeable features is the character line that connects the front lamps to the real tail lights. Another key feature is the tapering window line, which gives the SUV a sportier persona. BRV packs in round wheel arches, glossy black body cladding, sporty multi-spoke alloy wheels, shark fin antenna, roof rails, and roof mounted spoiler.

The new BRV from Honda will borrow its powertrain from current-gen Honda City. The 1.5 litre petrol motor can also be found on some other Honda cars sold globally. On BRV, the engine could be tuned to deliver 121 hp of max power and 145 Nm of max torque.

Transmission options will include 5-speed manual and a CVT automatic. Initially, the MPV may not be equipped with a hybrid powertrain. There will be multiple variants on offer, all of which will be using the same 1.5 litre petrol motor. It will also get Honda Sensing ADAS features like Lane assist, etc.

As of now, Honda does not have a seven-seater product in the Indian market. Along with BR-V, Honda CR-V has also been discontinued. Due to these reasons, new 2022 BRV could be a possibility for the Indian market. However, there is no official word from Honda on this. If it is launched in India, Honda BRV will take on rivals such as Maruti Ertiga / XL6, Mahindra Marazzo and the upcoming Kia MPV.