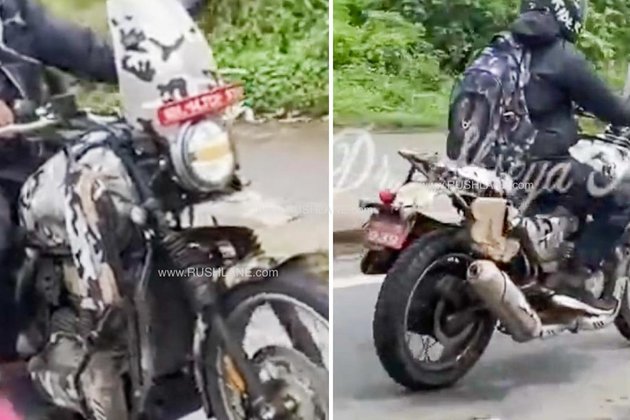 It seems Classic Legends have taken upon itself to revive iconic yesteryear motorcycle brands that have been left defunct for many years. They have sucessfully revived the Jawa brand with launch of two motorcycles. Next, they have plans to revive BSA and Yezdi brands. Of the two, BSA will focus on export markets like UK, while Yezdi will be launched in India.

Earlier this year in March, the first test mule was spotted which is believed to be of the upcoming Yezdi Roadking. The same test mule has now been spotted by automotive enthusiast Shreya Patil and Abhijit Patil on the Mumbai - Pune highway. But along with the Roadking, another test mule has been spotted alongside. This one looks like a ADV motorcycle, which will rival the likes of Royal Enfield Himalayan.

Roadking test mule on the other hand, is being developed on the same lines as a scrambler. The bike could also sport the LED lighting at the front and rear, a digital console and dual channel ABS with raked telescopic front forks and front and rear disc brakes. Take a look at the spy video below. Hat tip to Suyog for sharing the video with Rushlane Spylane.

Other features could include twin black gas shock absorbers, spoked wheels and circular shaped rear view mirrors. As seen on other scramblers in its segment, the new Jawa model could also receive tall set handlebars and rear set footpegs for a more upright riding stance. Colour options could include Grey, Maroon, Black.

It is being speculated that Yezdi bikes will undercut their Jawa cousins which can leave a big impact on the modern retro motorcycle segment in India. The new Yezdi bikes can share several commonalities with its Czech counterparts like engine and platforms in order to keep production costs in check. It is also a possibility that both ranges of motorcycles are retailed under the same roof.

The upcoming Yezdi motorcycles could be powered by the same engine which is on offer with Jawa motorcycles. This is in the form of 300cc single cylinder unit on offer with the Jawa and 42. It may also be powered by a larger 334cc engine that powers the Perak making 30 hp power. Both these engines will get mated to a 6 speed manual as standard.

Yezdi was a famous motorcycle brand back in the 1970s and 80s which was developed by Ideal Jawa (India) Limited. The Mysore-based company sold licensed Jawa motorcycles in India from 1960 which was rebranded into Yezdi in 1973. The range offered under this brand consisted of models such as Monarch, CL 2, Roadking and 350 which were based on older two-stroke Jawa bikes. The motorcycles were discontinued in mid-1990s due to the arrival of stricter emission norms.

If previous reports are also to be considered then Classic Legends might also develop and manufacture an electric motorcycle under the Yezdi moniker. With retro middleweight motorcycles being the talk of the town in recent times, manufacturers have realised that this segment might give them good returns in the long run.