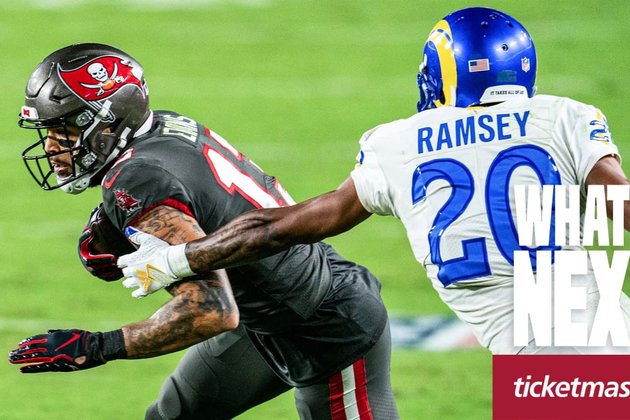 After a 2-0 start to their Super Bowl title-defense season, the Tampa Bay Buccaneers will head to the West Coast for their first road test of the year and their first-ever visit to the new SoFi Stadium in Los Angeles. Waiting in the NFL's newest football palace will be the 2-0 Los Angeles Rams and a matchup of two teams that could be fighting for NFC supremacy all year.

The Buccaneers won their 10th straight game and stayed perfect on the new year with a 48-25 win over the Atlanta Falcons on Sunday at Raymond James Stadium. Tom Brady threw five touchdown passes and the Bucs raced out to a 28-10 halftime lead but still had to scramble at the end to hold onto the win after the Falcons rallied to within three points. Two pick-sixes by safety Mike Edwards in a four-minute span sealed the victory.

Meanwhile, the Rams followed up their fairly dominant 34-14 win over Chicago in Week One with a tighter contest in Indianapolis in Week Two. Former Buccaneer Matt Gay hit the game-winning 38-yard field goal with two minutes left to claim a 27-24 victory in which Matthew Stafford threw two touchdown passes to Cooper Kupp.

Stafford is the big story in Los Angeles, potentially the final piece to the Rams' Super Bowl puzzle after an offseason trade that sent Jared Goff and several first-round picks to Detroit. The Rams have one of the NFL's best defenses and a wide array of skill-position players on offense, and now they have the strong-armed and experienced Stafford running the show. The 13th-year veteran has thrown five touchdown passes over his first two games as a Ram.

That aforementioned defense is led by two of the best players in the league, defensive tackle Aaron Donald and cornerback Jalen Ramsey. Donald has won three of the last four NFL Defensive Player of the Year awards and will be a huge challenge for Tampa Bay's interior-line blockers. Ramsey is a shut-down corner who the Rams move all over their defensive formation. On Sunday, the Rams' defense hit Colts quarterback Carson Wentz 11 times, three each by Donald and edge rusher Leonard Floyd.

The Buccaneers went to Los Angeles two years ago for a game played in the L.A. Coliseum, before SoFi Stadium opened in 2020. Tampa Bay scored a franchise record 55 points but still had to claw to the end for a 55-40 victory after a late-game defensive touchdown by former Ram Ndamukong Suh. Suh and company are coming back to the City of Angels next Sunday for a 4:25 p.m. ET kickoff and a game the whole league will be watching to see who stakes an early claim as a favorite in the NFC playoff race.