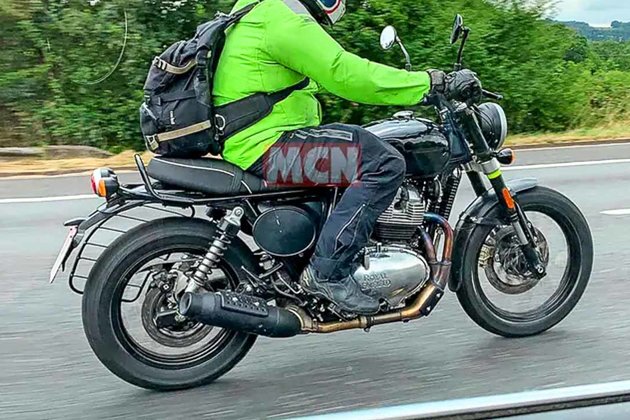 With 650 twins emerging as popular options in domestic and international markets, there seems ample scope to accommodate more body styles. Based on sightings of test mules, there are at least three new 650cc Royal Enfield bikes under development. Latest spy shots are from UK, where a 650cc scrambler version has been spotted on road tests.

Royal Enfield 650cc scrambler shares several of its features with other 650cc test mules spotted earlier on road tests. Retro styling is apparent, with features such as round headlamp, rear view mirrors, turn indicators and rear tail lamp. The bike has a dual-pod instrument cluster, which is likely to be same as 650 twins. Tear-drop shaped fuel tank has familiar contours as seen with Interceptor.

While the engine is the same as 650 twins, one key difference is the single-exit exhaust. The exhaust canister is a stubbier unit with blacked-out finish, as compared to extended, metallic shaded units used with 650 twins. The changes to the exhaust setup should ensure enhanced agility and manoeuvrability, which will come handy during rush hour traffic.

Other key features of Royal Enfield 650cc scrambler include inverted front forks, single-piece saddle, wire-spoke wheels and racing-inspired side panels. At rear, the bike seems to be using a new pair of dual shock absorbers. Both ends have disc brakes and will be offered with dual-channel ABS as standard.

Apart from its 350cc and 650cc range, Royal Enfield is also working to improve Himalayan. A new 450cc Himalayan is currently under development, which will be aiming to fix the limitations reported with Himalayan 411. While power and torque will be on the higher side, Himalayan 450 will also get some new features such as USD front forks. It will have a sportier body style to establish a better connect with evolving consumer preferences.