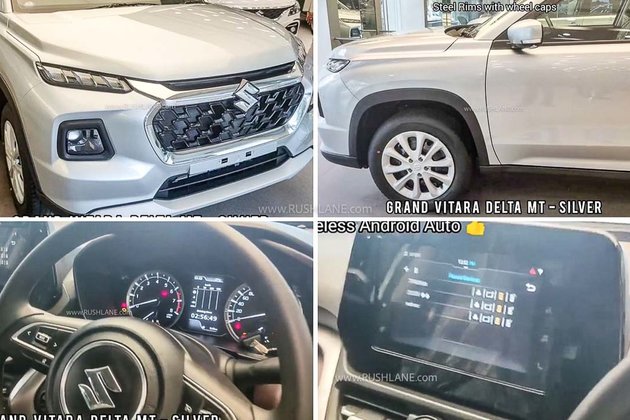 For the last couple of years or so, Maruti Suzuki had been losing its market dominance, thanks to a virtual absence in the compact SUV space. To arrest this market share loss and bring in sales growths, Maruti is now counting upon its all new Grand Vitara.

Maruti unveiled the car in July'22 and now is preparing for its launch, which is to take place tomorrow, 26th Sep. Ahead of that, dispatch of Grand Vitara to dealerships across India has started. Until now, we had only seen the top variants, this is the first time we are getting to see the Grand Vitara Delta Mid Variant.

Grand Vitara will be sold in 6 different trim levels. Maruti will be employing traditional Nexa nomenclature for its variants. These would include Sigma, Delta, Zeta, Alpha, Zeta+ and Alpha+. Zeta+ and Alpha+ are trims which will be available only with a strong hybrid powertrain.

Maruti Grand Vitara Delta MT Mid Variant is missing out on sunroof, alloy wheels, larger touchscreen. It does get a 7 inch touchscreen with wireless Android Auto and Apple Carplay. There is also a twin-pod instrument cluster with a MID in between. Take a look at the detailed walkaround video below, credited to Dinup P Pillai. Hat tip to automotive enthusiast Najeeb for sharing the update.

Mild-hybrid variants will draw power from a 1.5 litre 103 hp petrol motor. A 5-speed manual transmission will be offered as standard across the range. Customers will have an option to choose a 6-speed autobox if they choose Delta/Zeta or Alpha trims. Off-roading enthusiasts will have flexibility to choose Suzuki's AllGrip All Wheel Drive system. However, it will be offered only with a manual gearbox on Grand Vitara's Alpha trim.

Strong Hybrid variants, namely Zeta+ and Alpha+ will draw power from a 115 hp string hybrid powertrain, which will be powered by a 1.5 litre petrol motor. Transmission options will be limited to just an e-CVT.

Prices of the new Grand Vitara SUV are expected to be in the Rs 10 lakh to Rs 18 lakh range. Official prices will be revealed at the launch event tomorrow. Bookings for the SUV had started in July, against a taken deposit of INR 21K. Ahead of launch, it has received over 50K bookings already.

Interestingly, around 45% of these bookings are for its strong hybrid powertrain options. While strong hybrid variants will charge a higher price premium up-front, they will aid customers with a better fuel efficiency output, benefits of which customers can continue to reap for years to come.

Direct competition of Grand Vitara will be limited to the likes of Kia Seltos, Hyundai Creta, Skoda Kushaq, VW Taigun and new Toyota Hyryder. One trump card which both, Grand Vitara and HyRyder can boast of is availability of a strong hybrid powertrain option, which all of their competitors miss out upon. If Maruti and Toyota (with its Hyryder) are able to make strong Hybrid powertrains mainstream, it could possibly bring in a mini revolution in the Indian automotive space. Honda, which is another Japanese counterpart of Suzuki and Toyota, had also brought in a strong hybrid variant of City earlier this year.