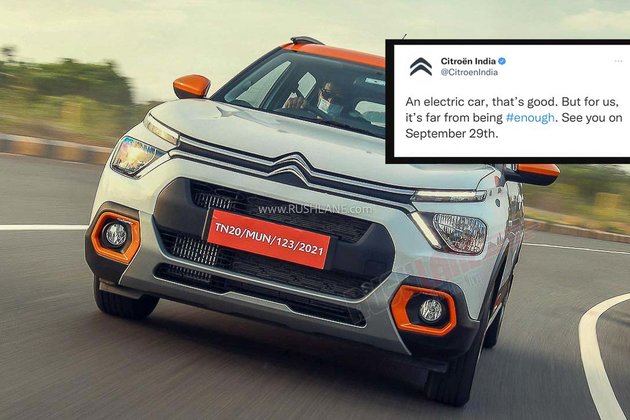 Citroen forayed into India with C5 Aircross. But it entered the mainstream segment with Citroen C3. After testing for a couple of years in India, Citroen C3 was launched and the company has started testing a 7-seater version too. It is likely to be called Citroen C3 Plus and will be almost as long as an Ertiga or even Carens.

Citroen C3 was made available for retail at La Maison Citroën phygital showrooms across 19 cities. Citroen doesn't want to stop there. With EV popularity slowly on the rise, we have multiple manufacturers setting foot into the arena. But it is really Tata Motors that is likely to trump EVs in India for a long time as it is working on Tiago EV at a lower entry price point.

This Rs. 11 lakh price bracket is going to be the most important one for manufacturers. Now Citroen wants to jump on this bandwagon and get into a brawl with Tata's upcoming Tiago EV with a new Citroen C3 electric. The teaser just came through and is pretty hot. Let's take a look.

Like the ICE-powered C3 and C3 plus, C3 electric falls into Citroen's plan to bring in three new models in India as part of its C-Cubed program. Production will take place at CK Birla facility in Thiruvallur near Chennai, Tamil Nadu. Like conventional C3 and C3 Plus, C3 electric will also be based on a Common Modular Platform (CMP) with high localisation.

On its social media, Citroen asks the question "What is enough?". The French brand goes on to say that an electric vehicle is good. But for them, it is far from being enough. This could hint at multiple projections onto the segment Citroen is targeting. One, it might be a fully electric offering with better range than the expected competition.

Saying that an EV is far from being enough, also means that Citroen might be working on a parallel hybrid system that incorporates a small electric powertrain for short city commutes while highway excursions can be handed over to its ICE engine. This system is highly unlikely owing to the complications and associated costs.

We have spotted multiple Citroen test mules in the past even after the launch of C3 hatchback. A few of those test mules are of larger C3 Plus 7-seater and a few are the same size as that of a regular C3. Size-wise, Citroen C3 electric will be similar to outgoing ICE-powered C3 and will likely pack the same interior space.

The French charm of C3 is highly unlikely to be disturbed. And we can see the same set of features as well. Features like split LED headlamps and DRLs, wrap-around LED tail lamps, faux skid plates, roof rails and body cladding, 16″ diamond cut alloy wheels and more.

Interior features include sport Anodized Grey and Zesty Orange colours palettes with leatherette upholstery. Also offered are a digital instrument cluster, a 10" free-standing horizontal touchscreen infotainment system with wireless Apple CarPlay and Android Auto, a sporty-feeling flat-bottom steering wheel with steering mounted controls, and vertical AC vents among many others. Citroen will reveal C3 electric on Sep 29 and launch will happen sometime in 2023.